Have I mentioned lately how much I love living in NE Georgia? Well I do. Unlike Florida with its two seasons, hurricane and summer (which happen to overlap), this time of year

brings new growth each week.
Spring vegetation begins in late winter with the daffodils poking up through the ground and their yellow and white flowers dotting the landscape. Soon after there’s an explosion of color from leaves, grass and flowers. Currently my Bearded Irises are standing tall and looking beautiful. My Knockout Roses have flowers and many more blooms on the way. It took two years for them to get established, we also had a problem with chickens eating the blooms, but they seem to be doing just fine now. In my flower garden next to the Irises are a multitude of Lily varieties. Buds appeared over the weekend so in a just a couple more weeks as the Irises fade, the Lilies 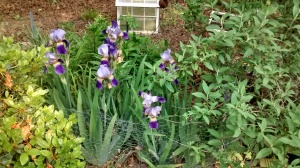 will take over.
In addition to the beauty you can see with the eyes, there is also beauty you take in through your nose. Honeysuckle is flowering and perfuming the air. Mingled with other scents I can’t identify, I’m distracted from the climbing humidity as Rooster and I take our walks in the morning.
Another thing spring brings, more outside time and outside wine sipping. This past weekend my parents were here for Mother’s Day. As we sat in rockers on the front porch, I teased them about bringing the heat from Florida. Granted it wasn’t nearly as bad and humidity was not too high, it was still warmer than I’m currently used to. I knew just what we needed, a summer wine. A sample I received of Reunite Lambrusco to the rescue.
I’m not a sweet wine drinker but there is a time and place for everything and the first hot weekend, sitting on the porch, it was time for a light easy drinking wine. Luckily my step-dad likes sweet wines and he gave the Lambrusco two thumbs up.
We finished the bottle inside paired with bone-in grilled country ribs finished with a peppery BBQ sauce, purple potato salad, three cheese mac & cheese, broccoli cheese cornbread and deviled eggs. The rest of the week I think will be heavy on salads and protein. Can you say Carb overload.
Reunite’s history began in 1950 when nine wine producers from the Italian region of Emilia-Romagna joined to form the Cantine Cooperative Riunite. In 1967 the group introduced Americans to Lambrusco which had a niche among many American wine drinkers at the time. If you’re old enough you may remember the TV ads in the 1970’s and 1980’s, “Reunite on Ice…That’s nice.” Imported by Banfi Vintners, 2015 ushers in a new Reunite with new labels, new advertising and a new website. Click here to go on their website and checkout the old classic ads.
This morning while walking Rooster, I passed a patch of honeysuckle and was immediately taken back to 1974. It was that year my mom, dad & I left Illinois and moved to Ft. Myers, Florida. We rented an old house off McGregor Blvd. The summer air was always heavy with honeysuckle, jasmine and orange blossoms. At that time there were still plenty of orange groves in the area and it seemed every house had at least one orange tree. To me that was Florida, perfumed air. Which trust me is better than the dead sea life smell you’d get from Ft. Myers Beach so often.
The houses are still there but the groves are gone. Replaced by parking lots, strip malls, miniature golf and so many things that diminished the beauty and nature. Progress they call it. I call it sad. I know the urban sprawl from ATL is spreading my way. I see it in local small cities and read in the local newspaper how the politicians want big industry (yet the deny a distillery), big chain grocery stores and big chain restaurants.
I’ll hold onto the charm of my new area as long as I can and just cross my fingers no big changes come and destroy our beautiful surroundings.

Below are some pictures from Amicalola Falls State Park. We had a pre-Mother’s Day picnic there this past weekend. So beautiful.