Looking out my window I watch yellow leaves as they float to the ground covering our patchy grass on our large wooded lot. Cool breezes blow gently through the tree branches still full of green leaves that will soon turn to orange and crimson. Fall is by far my favorite season. Not only because I now live in a region that experiences a true fall but it includes one of my favorite holidays, Halloween.

I’ve always loved scary stories, enthralled by witches and obsessed with ghosts. As a kid I 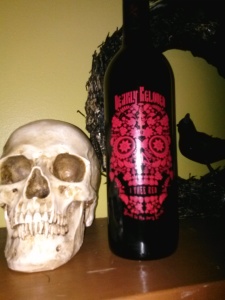 was never afraid of monsters under the bed, I was convinced there were ghosts in my closet. At the age of 10 I read the Amityville Horror but would read only during daylight hours and I made certain the book was not to be in my room at night.

As an adult I still have my love of all things haunted and spooky but I also love skulls so I was immediately drawn to Dearly Beloved I Thee Red wine. The reminiscent Day of the Dead Mexican Folk Art drew me to the bottle, the taste continued to draw me to the glass.

Aromas of strawberry, vanilla and cigar box (I love this scent). Dark berry flavors, firm tannins with a long spicy leather finish. My husband and I sucked this baby down. When I went back to Trader Joe’s this past week I was a little sad when I didn’t see it on the shelf.

As with so many Trader Joe’s wines I had difficulty finding information other than it’s bottled and cellared by Dearly Beloved Wines out of Hopland, CA
Per the Trader Joe’s site; “Dearly Beloved Forever Red is a blend of Merlot, Zinfandel, Petite Sirah, Syrah, and Cabernet Franc, from the Central Coast, crafted just for us by a much-sought-after winemaker.”
Alc – 13.5%
SRP – $7.99

What are your favorite scary haunts? I’m not referring to the dark and dingy dive bar down the road but what types of places really give you the creeps? For me it’s hands down, insane asylums. Especially those that are old and dilapidated with not only the old hospital equipment left behind but memories of what occurred there too. Another is old houses; I’m convinced they’re haunted.

On my own road there’s an old house built somewhere between the 1920’s-1940’s. Early this year the old woman who lived there, probably much of her life, died. I only recently learned she did pass away but I knew she was no longer in the house but some of her belongings remain. The house has stood empty for about eight months now. The weeds have grown tall, the crepe myrtles are thick and heavy with the last remaining blooms and there’s a small red and white tricycle left from a grandchild barely visible in the overgrown grass.

During the summer Rooster and I picked pears growing from a tree in the field next to the house. But now when Rooster and I walk past I’ve begun to get and uneasy feeling, one of being watched. I stare up at the old house and try to see if I detect movement from inside. I never do but even Rooster looks up at the house as if he senses something.

Next to the house is an old run down small barn. It used to house chickens and maybe small livestock. So many of the old worn, gray wooden blanks are missing you can see into parts of the barn while passing by on the street and strange noises have been coming from this barn over the past few weeks. At first I thought it was just the wind rattling the rusting tin roof which is barely hanging on to the old dry boards or maybe crows or even a wayward acorn.

Last week I notice a large opening in the thick bushes along the road. I also noticed what appear to be tracks leading from the road, through the ditch and up to the side of the old barn. I stepped closer, knowing in horror movies this is the exact moment the maniacal killer would leap from the bushes with a chain saw, ax or some other killing tool. Something in the bushes moved, I jumped and let out a little scream. That’s when I saw it…bear scat on the side of the road. Yep, I think there’s a bear living in that run down old barn. Rooster and I decided to make our own scat and tracks in the way of getting out of there quickly.

I don’t know for certain there’s a bear in that barn but I do know I feel a little on edge when passing the property. This week I did see someone next to the house, I about jumped out of my skin too. It was an old woman with her hair in curlers and wearing a pink house coat. I walked by without looking in her direction and when I turned around, she had disappeared…