Last week I spoke to the first half day of my Wine Blogger’s Conference 2012 (WBC12) Washington County Pre-conference Excursion. That first day was so spectacular, I had to wonder what was in store for us on day two. Here’s a little peek; Montinore Estate for morning wine tasting, lunch at South Store Café, a bit of  shopping at Smith Berry Barn, more wine tasting at Hawks View Cellars, a few cold micro-brews at Two Kilts Brewing Company while feasting on Korean-Mexican fusion food truck cuisine from Koi Fusion. All this and we never left WashingtonCounty. Yep, life was good.

and braved the rising temps in the vineyard. There we tasted some great wines while receiving some background on the winery.
Montinore Estate is one of the largest producers of biodynamic/organic wines using Demeter Certified Biodynamic farming methods. Using these methods allows the vineyard team to gently coax the true flavors and variances from the grapes.
The vineyard is located in the far north side of WillametteValley (remember it’s Willamette Dammit) protected by the Coastal Mountain Range to the west. The loamy clay soil, elevation and long cool growing season allows for expressive Pinot Noir, Pinot Gris, Gewürtztraminer, Riesling and more.
There’s something to be said about standing in a vineyard, overlooking rolling hills while swirling a glass of wine. Oh the fact that it was around 10:30 AM. while others were working made it even sweeter. I couldn’t resist sending a text picture to my husband with glass in hand and vineyards in the back ground. Ah, if only all my days could begin in a vineyard with a glass of wine.
A plus, they’re available nationwide. I found a Pinot Noir at a Total Wine in Alpharetta, GA this past weekend.
3663 SW Dilley Road
Forest Grove, OR

South Store Café
After a big breakfast at McMenamins in the Children’s Cottage, I wasn’t sure I would be 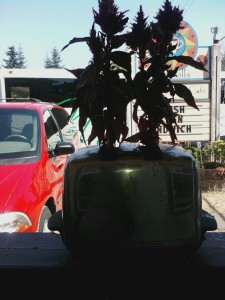 hungry for lunch but I managed just fine. Located in a building dating back to 1903 the quirky eatery was once a general store and meeting hall for Independent Order of the Oddfellows. In the 1940’s the building housed a soda fountain with games of pinochle and dances on the second floor.
So what makes the café quirky? Could be the old coffee pots and toasters serving as planters on the rail of the side porch. Could be the way the building leans. Or maybe it’s the story behind why the building leans. Seems back in 1962 the winds picked up perhaps up to 100 mph. After the winds stopped the building was still standing but no longer standing straight, instead it now had a slight tilt to the right. Rumor has it the owner at that time tried to straighten it by hitching up his tractor to the leaning building. I can tell you, it didn’t work, the building has a slight lean to this day.
24485 S.W. Scholls Ferry Rd
Hillsboro, OR 97123

Smith Berry Barn
Located across the road from South Store Café, Smith Berry Farm is your stop for fresh 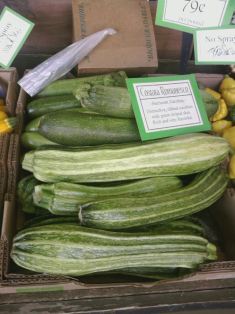 produce, herbs, plants, gifts, espresso, milkshakes, local art and much more. This was just an excursion from our excursion and a chance to pick up some local items. A must visit if you’re in the area.
24500 SW Scholls Ferry Road
Hillsboro, OR 97123

Hawks View Cellars
Next on the agenda, more wine to taste, this time at

Hawks View Cellars, named for the graceful hawks seen soaring aloft. Located on Chehalem Mountain in Sherwood, Oregon, the boutique winery produces limited amounts of estate-grown Pinot Noir and Pinot Gris.
Family owned, the winery was purchased in 2002 by recently retired Jack Kemp. Living amongst the existing vines, Kemp originally had no plans to get into the winemaking industry. But those old vines must have been calling to him and in 2007 plans for Hawks View Cellars were in full swing.
John Alexander Kemp passed away in January 2012 but his legacy continues and is still run by his wife Willie and son A.J.
20210 SW Conzelmann Rd
Sherwood, OR 97140 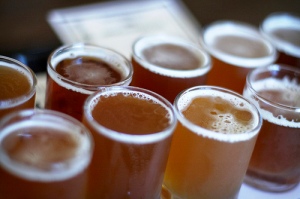 Founded in 2009 by two friends, one of Scottish heritage the other of Irish heritage they opened their doors to the public in 2011. The brewery specializes in India Pale Ale and Scotch Ale all made with local ingredients. As we bellied up to the bar or one of the several picnic tables with beer in hand, we felt our pre-conference excursion drawing to a close. Soon we would be immersed in wines from all across Oregon, Greece, Argentina and many, many more regions. But first we need to eat again, it’s been at least an hour or two since lunch and we need to keep food in us with all this drinking.
Lucky for us the Koi Fusion truck was waiting to take our orders for their scrumptious twist on KoreanBBQ/Mexican fusion cuisine. If you come across this one during travels in PDX, don’t forget the kimchi. So spicy it’ll make you slap your mama!
Two Kilts Brewing Company
14841 SW Tualatin Sherwood Road
Suite 501
Sherwood, OR 97140

As we rode the bus back to Portland I had a chance to reflect on all the places I’d seen and people I’d met in just a day’s time. Think we did a lot of tasting in this twenty-six hour time frame? You haven’t seen anything yet, over the next two and half days I estimate I tasted around one-hundred-fifty wines. Ironically I think I drank a total of six full glasses of wine through that same time frame. Lots of spitting and dumping going on at the WBC.